Prince Edward and Sophie’s Royal Caribbean tour – which has already seen their visit to Grenada postponed – has hit another problem after island officials warned: ‘We hear the phony sanctimony of those who came before you’.

The pair had been due to travel to the island, where the Queen is still head of state, as part of a Platinum Jubilee Tour to the region.

But following high-level discussions between Buckingham Palace, the government of Grenada and its governor-general, the Queen’s in-country representative, an 11th-hour decision was taken to cancel.

Now Ambassador Dorbrene O’Marde, Chairman of the Antigua and Barbuda Reparations Support Commission, has written an open letter to Prince Edward and Sophie Countess of Wessex that could hardly be described as welcoming.

It criticized the Royal Family for past comments on slavery and warned them not to repeat them.

The message said: ‘Everyone in your family continues to live in the splendour, pomp and wealth attained through the proceeds of the crime.

‘It has become common for members of the Royal Family and representatives of the government of Britain to come to this region and lament that slavery was an “appalling atrocity”, that it was ‘abhorrent’, that “it should not have happened”.

‘We hear the phony sanctimony of those who came before you that these crimes are a “stain on your history”. 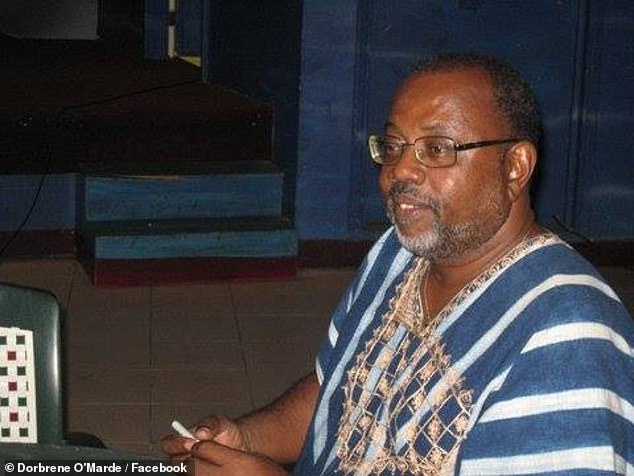 Dorbrene O’Marde, Chairman of the Antigua and Barbuda Reparations Support Commission, has written an open letter to them 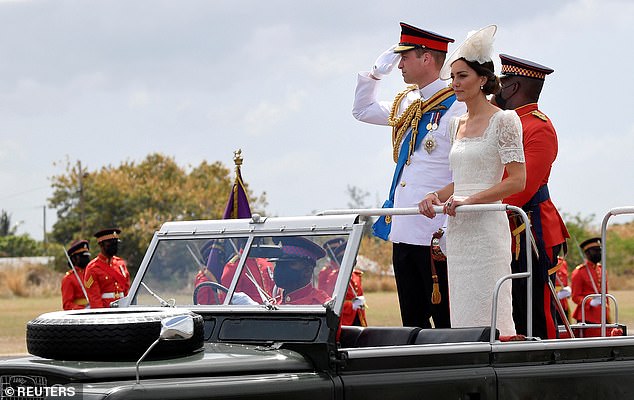 It follows Prince William and Kate Middleton’s trip to the region last month, which saw the couple face backlash over ‘avoidable PR’ errors. There were several missteps. They were accused of taking part in ‘colonial-style’ photo opportunity by riding around in a 1953 Land Rover inspecting troops, with William wearing military uniform (pictured)

‘For us, they are the source of genocide and of continuing deep international injury, injustice and racism. We hope you will respect us by not repeating the mantra.

‘We are not simpletons.’

It comes amid ongoing sensitivity over the fall-out of the Duke and Duchess of Cambridge’s recent tour to Belize, Jamaica and The Bahamas.

It proved to be a tricky tour for the couple, who faced protests, allegations of modern-day colonialism and renewed calls for the British realms to finally become republics.

It prompted William to reflect on the issue in a striking speech at the end of the tour, in which he emphasized that the monarchy would support the decision of any former colony to remove their British head of state, saying: ‘We support with pride and respect your decisions about your future. Relationships evolve. Friendships endure.’

Buckingham Palace has been doing a great deal of soul-searching about the structure of future royal towers, particularly in former British colonies.

While some of the limited opposition to the Cambridge’s largely well-received tour was to be expected or out of their control, officials are exploring what lessons can be learned from criticism, for example of the ‘colonial overtones’ of the Cambridges leaving a military parade in Jamaica standing in the back of a Land Rover used by the Queen in the 1960s.

The decision to pull out of Grenada has been a surprise, however. 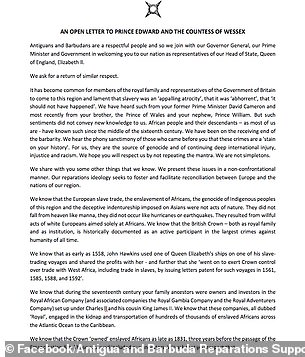 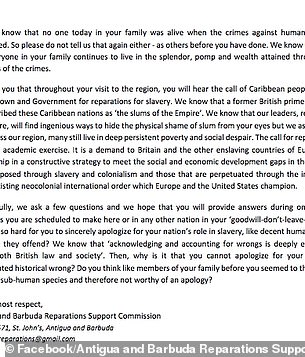 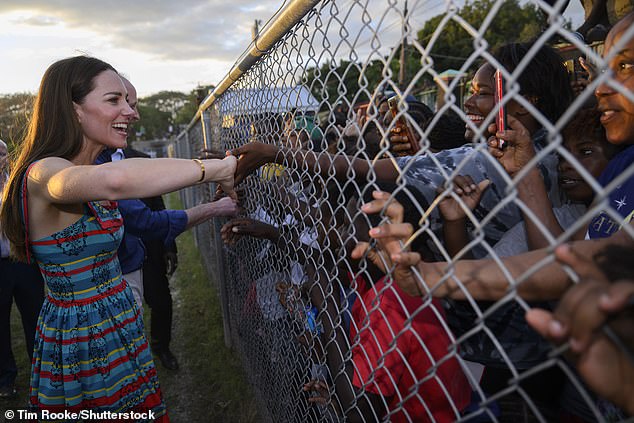 Another mishap included pictures of the couple shaking hands with black children through a wire fence in Trench Town, Jamaica

The platinum jubilee tour in full

The Prince of Wales and The Duchess of Cornwall visited the Republic of Ireland from Wednesday 23rd to Friday 25th March 2022.

The Duke and Duchess of Cambridge visited Belize, Jamaica and The Bahamas from 19th to 26th March 2022.

The Earl and Countess of Wessex will visit Antigua and Barbuda, St Lucia, and St Vincent and the Grenadines from Friday 22nd to Monday 28th April 2022.

While there is a definite sense of the country, which secured independence from Britain in 1974, inevitably progressing to become a republic one day, it is not a nation where the issue is particularly prevalent at the moment.

But sources have indicated that lengthy discussions with the Grenadian government and local officials to ensure the Wessexes’ itinerary would meet the aims of the tour – to celebrate the island’s heritage and ongoing successes as well as marking The Queen’s Platinum Jubilee – had thrown up problems.

As a result of those discussions, the Governor General Cecile La Grenade advised that the trip should be postponed.

She was unwilling to discuss the specifics of the problem yesterday but an aide said: ‘All I can say at this stage is that it was a mutual decision.’

The Wessexes will still visit Saint Lucia, Saint Vincent and the Grenadines, and Antigua and Barbuda over a week-long trip.

Buckingham Palace said the couple would meet communities, local entrepreneurs and craftspeople, and young people ‘in celebration of the culture, future and vibrancy of the islands’.

While visiting Saint Vincent and the Grenadines, The Earl of Wessex will meet athletes in training for the Commonwealth Games, to be held in Birmingham this summer. 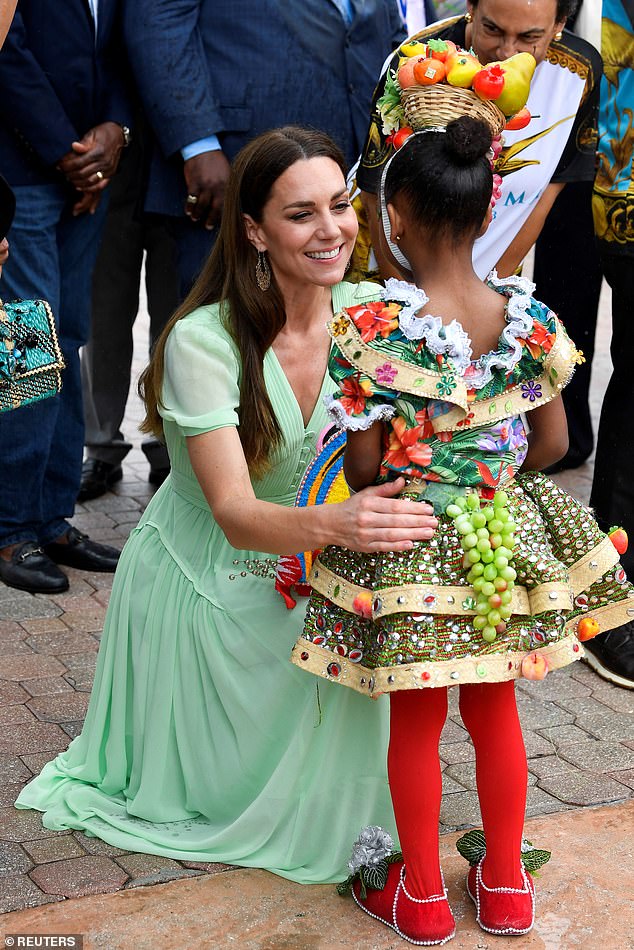 At a traditional Bahamian Junkanoo – or street parade – in Nassau Kate was particularly taken by one performer, five-year-old Cattleya Green, who along with her sister, Tatiana, eight, had dressed in colorful home-made costumes to resemble traditional Bahamian straw dolls

Meanwhile, The Countess will speak to women in leadership roles about the community’s response to the eruption of the La Soufriere Volcano.

Their Royal Highnesses will also congratulate those who have recently completed their Gold Duke of Edinburgh’s Award.

In Antigua and Barbuda, The Earl and Countess of Wessex will hear more about the importance of sport in the community.

Their Royal Highnesses will meet some of the West Indies’ legendary cricketers, and Antigua’s national rowing teams.

The Earl and Countess will attend a reception for local artisans and non-profit organizations.

The couple will explore the varied landscape of Saint Lucia, visiting the Sulfur Springs and the Pigeon Island National Landmark.

The Earl will conduct an Investiture on behalf of Her Majesty, and Their Royal Highnesses will attend a Service to mark The Queen’s seventy-year reign.

The jubilee schedule is one of the first signs of the new look monarchy, with Prince Andrew and the Duke and Duchess of Sussex previously making similar overseas trips.

The Queen, who no longer flies, would not have been expected to travel, but it’s rare for Wessexes to do a high profile joint overseas tour that might have otherwise been handed to Harry and Meghan.

It’s long been believed that Prince Charles will ‘slim down’ the monarchy when he becomes king to eight key members.

The trips to the Caribbean islands will see the senior royals on a charm offensive following in a bid to shore up support for the monarchy in the region.

In November, Prince Charles visited Barbados for a ceremony to mark its historic decision to remove the Queen as head of state.

Other Commonwealth countries in the region, including Trinidad and Tobago, Guyana and Dominica, already have their own heads of state.

Last year, John Briceno, the Prime Minister of Belize, did not rule out his nation following suit, saying: ‘We need to find what fits Belize best.’