Sale led at the interval after Manu Tuilagi ran unopposed, but Racing regained momentum after the break.

Teddy Thomas collected his own kick to score the first try before Finn Russell dramatically delivered the second.

Akker van der Merwe reduced the deficit but Juan Imhoff and Max Spring scored either side of Ben Curry’s consolation.

The good start of the sale foiled by chic Parisians

The news from Sale’s camp ahead of the trip to the French capital was their intention to rush in defense to disrupt Scottish fly-half Russell and Racing’s talented players.

For 40 minutes at the Paris La Défense Arena, the plan worked like a charm and Russell was denied a quality ball to launch attacks as the blue wall relentlessly pushed forward.

What let Sale down was their disappointing line-up, with balls often lost on the pitch, or held in a rush, which impeded their own fluid attacks.

The visitors scored the first try, however. It looked like they were past the move, but Tuilagi grabbed the loose ball behind him and ran unopposed under the posts in the penultimate act of the first half.

The final act saw Rob du Preez make amends for his missed penalty early to convert Tuilagi’s try. The scoreboard reflected a carefully crafted game plan to stifle their hosts, but their 10-6 lead only lasted a minute into the second half.

The races came out of the tunnel in a very different mood and luck was certainly on their side.

Russell kicked Thomas, who collected the bouncing ball under challenge from Luke James. In the same move, the French winger dropped it on his boot – staying on the pitch by the smallest of margins – before running on his spot kick to score.

On another day, the winger could have been judged in contact, but there was nothing questionable about Russell’s excellent try.

It was initiated by a superb cross shot deep in his own 22.

When Sale regained possession and tried to clear his lines, Russell ran on the ball and cleared the field on the volley.

The rebound of the ball, back over the head of AJ MacGinty, favored the Scottish fly-half and he delivered a precise kick to score as Racing broke Sale’s resistance in nine minutes from a second period.

Van der Merwe powered forward to reduce the deficit, but Le Garrec’s five penalties still kept the hosts out of touch, and when Imhoff crossed after a smooth move, the game was over.

Ben Curry, in place of injured brother Tom, scored a late consolation but with MacGinty in the trash, Racing saved the best running rugby to the finish, with Spring the beneficiary as he completed a move that included some excellent offloads.

The races will qualify for an all-French semi-final with La Rochelle, last year’s runners-up, and will aim to do better than their own three second-place finishes. 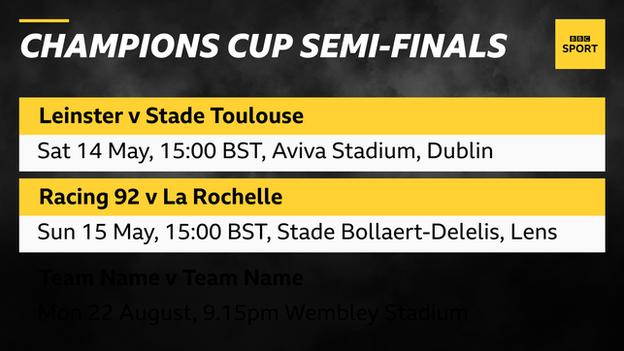 “I just volleyed” – what they said

“They’re very physical and our ruck probably wasn’t as good as it should have been, and because of that we were getting a slow ball which allowed them to put a wall in front of us.

“They put us under pressure in the first half, but we managed to overcome that in the second half and open up a bit.

“It was my first try of the year actually and it was pretty good. When the ball was bouncing I was like ‘do I pick it up or do I just have a crack?’ So I just flew in. The ball bounce worked well.