Celtic made it a title celebration to remember as they turned on the style to beat Motherwell 6-0 in their final game of the season.

It was a day of celebration at Celtic Park after reclaiming the Scottish Premiership title with a midweek draw at Dundee United.

They ensured it was a memorable celebration against a Motherwell side who had already secured European football for next season.

Doubles from Kyogo Furuhashi and Giorgos Giakoumakis and goals from David Turnbull and Jota made it a title celebration to remember as Tom Rogic and Nir Bitton bid an emotional farewell to the club they had called home for ten seasons.

Celtic’s stunning title win also ensured that fans will be able to enjoy Champions League group stage football next season, which is worth around £40m to the club.

How Celtic kicked off the party on Trophy Day

Ange Postecoglou, a league and League Cup winner in his first season in charge, transformed a club that finished 25 points behind Rangers last season by finishing four points clear of their arch-rivals .

Motherwell had already qualified for the Europa Conference League qualifiers but they will want to forget about this game in a hurry.

Australian midfielder Rogic started the game with the approval of enthusiastic home support as Jota, Furuhashi, Daizen Maeda and Turnbull also returned to the squad with Israel international Bitton on the bench.

Well boss Graham Alexander made two changes with Bevis Mugabi and Victor Nirennold, on his first start since signing in January, replacing Liam Donnelly and Juhani Ojala and they and their team-mates spent most of the first half .

It seemed only a matter of time before Celtic got the breakthrough and it came following a 22nd-minute error from Nirennold.

The French defender missed a deep Jota corner inside the penalty area and the Japan international wasted no time in turning around and shooting low past Well keeper Liam Kelly at his post close.

In the 32nd minute, as Motherwell pulled away with a rare attack, Jota’s cross from the left was met by the slippery Rogic whose shot bounced off the post with the offside flag raised or the striker Maeda Hoops. 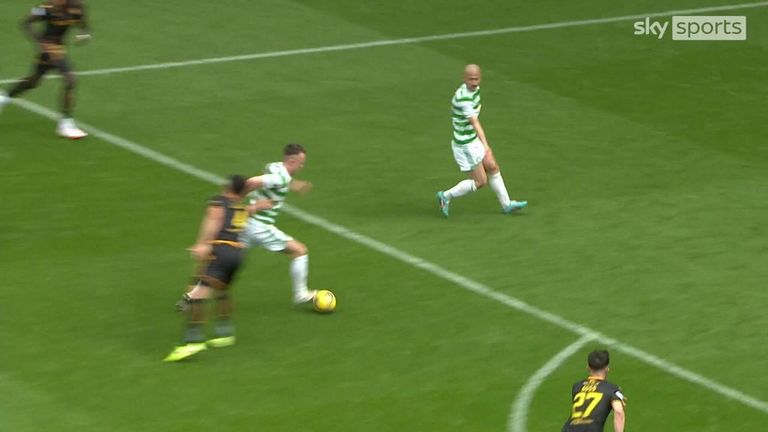 Celtic then had a minute or two of relaxation.

The locals won again and scored twice before the break. 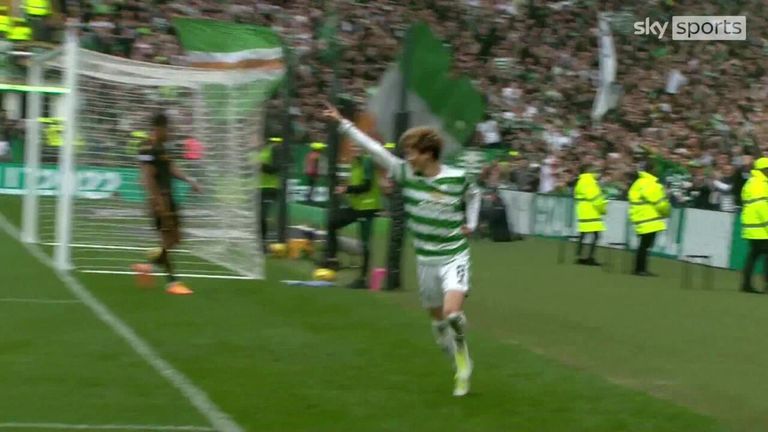 Turnbull combined with Maeda and turned Fir Park defender Rickie Lamie before firing past Kelly from 12 yards before Furuhashi volleyed in a perfectly weighted pass from defender Anthony Ralston with a trademark technique.

Motherwell had to regroup at the break and striker Kevin Van Veen replaced Sean Goss but it made no difference.

In the 59th minute, after Furuhashi’s pass to Maeda bounced off his fellow Japan international, Jota latched onto a loose ball to sweep it past Kelly. 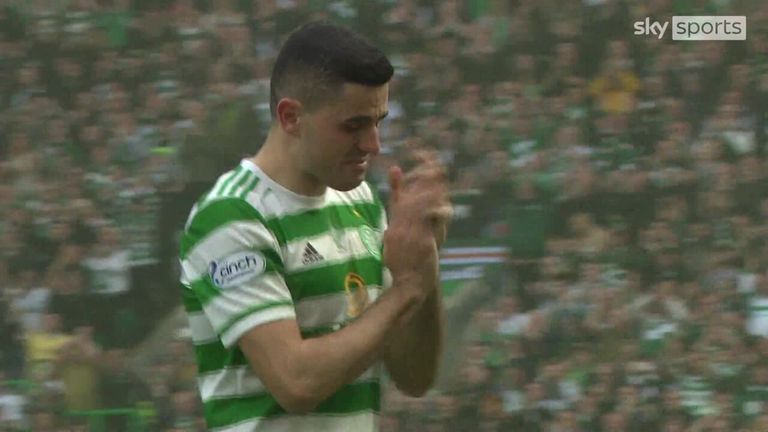 Tom Rogic received his second standing ovation as he was replaced by James McCarthy.

Then, amid a host of substitutions, Rogic was given a standing ovation by the fans and hugged by his teammates as he left for the last time and he was clearly overwhelmed with emotion.

Celtic continued and in the 68th minute the Steelmen defense allowed Giakoumakis to execute a six-yard header.

There were more cheers in the 85th minute when Bitton took over from captain Callum McGregor and he enjoyed his final moments in a green and white shirt, where Giakoumakis tucked number six in from close range in injury time .

what they had to say

Manager Ange Postecoglou told Sky Sports he was already planning next season as he enjoyed their title celebrations:

“We all start with the biggest ambitions and dreams. It’s been the tightest league for a number of years. Rangers have been exceptional this season.

“These guys have been amazing – they’ve gone 32 years without losing. We’ve had real clarity of purpose and tunnel vision all year. There was so much that could have gotten in the way of us.

“I want them to enjoy it, the players and the staff. Our families are making the biggest sacrifice. If they smile for an afternoon, I think that helps.

“I’m trying to kind of take it all in. There will be a moment of reflection and understanding of what we’ve achieved. Like those legends, 20 years from now we’ll have shared a magical moment.

“This afternoon, [I’ll stop] then back to work tomorrow! It’s a special moment.”

Tom Rogic struggled to hold back his tears as he bid farewell to the club he has called home for 10 seasons: 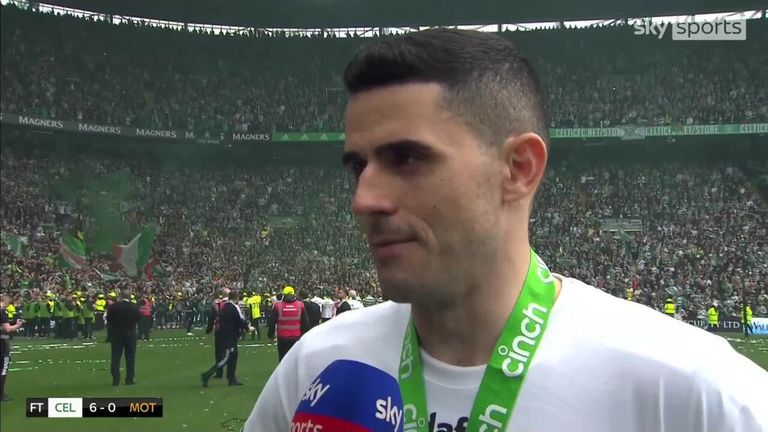 Tom Rogic said Celtic’s 6-0 win over Motherwell today felt like the perfect send-off as he lifted his final trophy for the club.

“It’s hard to put into words. The club has been a huge part of my life.

“I can’t thank everyone enough. I had a great start today and it was an emotional day for me and my family.

“I’m lucky to have had many great moments here, been part of many great teams and won many trophies. I look back on amazing times and memories and I can only say great things on the club.

“Look around you at this atmosphere, it’s special.

“Hopefully the success will continue and I’ll be watching.”

Nir Bitton told Sky Sports he is leaving Celtic as he always planned: 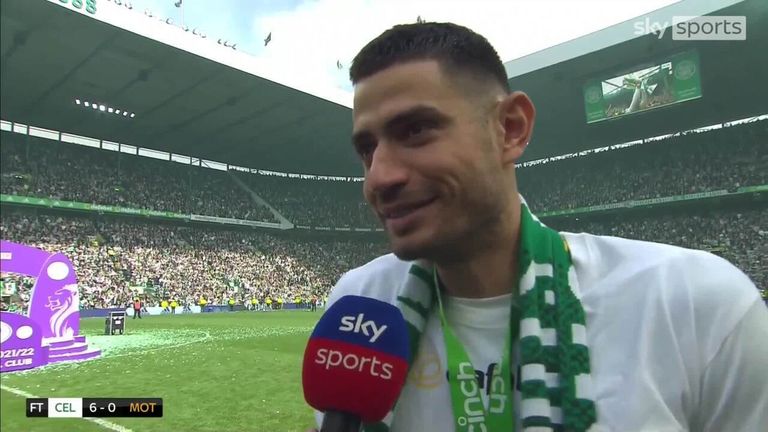 “Incredible. When I signed for this club I knew the expectations were high, but it’s about winning trophies and taking the club to the Champions League. I’m happy to end on a high note.

“I’ve won a lot of trophies, I’ve had a lot of ups and downs and injuries. But this club is all about winning and after last season the players knew how much it meant to bring that title back to home. I’m glad we did it for the fans.

“There are so many moments along the way. I will never forget my debut, winning the treble is an amazing moment and that moment – that’s how I wanted to end it.”